January 07, 2010
Happy New Year! This is my first post in 2010, after a brief hiatus celebrating year end festivities. Apart from watching the magnificent NYE fireworks in Sydney, I managed to do some sightseeing in Canberra and stumbled into the Canberra Deep Space Communication Complex (CDSCC). This place was a godsend as I have always had a deep obsession in astronomy. 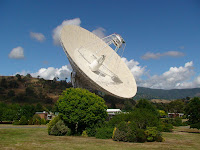 The CDSCC is part of NASA's Deep Space Network (DSN) and only one of three facilities around the world. The other two are in Goldstone, California and Madrid, Spain. There are four giant radio antennas in this complex.  Each are referred to by a "Deep Space Station" or DSS number. These "dishes" are enormous. The largest one, DSS-43, is 70m in diameter, and is a whopping 23 stories tall when standing on one end. It is the biggest of its kind in the Southern Hemisphere. Owing to high security, i.e. fences,  I could not get a close-up shot to do its monstrous size justice.

Operating 24/7, the antennas provide two-way communication with unmanned spacecrafts and space telescopes exploring the planets, moons, comets and other stellar objects throughout the solar system. Think of them as the central post office between various mission sites on Earth and the spacecrafts in orbit. Mission scientists on Earth route packets of data, such as course correction commands and software updates to these antennas for upload. Received data include vehicle health and position, plus images and data collected by science instruments aboard the vehicles. These antennas are ultra sensitive. Transfer ranges can be up to billions of kilometres from Earth. In fact, they can detect signals 20 billion times weaker than a watch battery. Go figure! 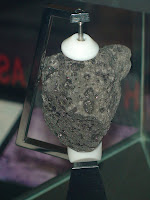 Within the complex, there is a small visitor centre that is free to the public. In there, you can find information on past space exploration missions and interesting facts about the planets in our solar system. The crown jewel exhibit is a moon rock sample, extracted during the Apollo 11 mission.  Carbon dating puts this rock at over 3.5 billion years old.

This place is a must-see if you are into astronomy and space exploration. I found the half hour drive from downtown Canberra relaxing and scenic as well. Have you been there before? And what did you think of it?

Last year, I took a number of vacations which involved cruising, diving, snorkelling and walking on glaciers. Thinking back on those trips, I could not help but notice that water and ice exhibited different colours in different settings.  I decided to dive deeper into the colours of water. Finally, here are my findings. Water’s True Colour The colour of an object mainly depends on the colour of light emitted from it. In the case of water its colour is also affected by factors like light source, absorption, scattering, and suspended materials. Absorption by water is stronger for red light, but weaker for blue light. Water is therefore, intrinsically blue. However, this effect is only apparent when the water is reasonably deep. This is why a glass of water appears colourless whereas a big aquarium looks bluish through the thickness of water. Why is the Sea Blue? I did two cruises last year, one in the Caribbean and the other in the South Pacific. Owing to the depth of the water, th
Read more

A Very Real Life Application of the Stable Marriage Problem

October 23, 2012
I recently stumbled upon a mathematical problem known as the  Stable Marriage Problem (SMP).  Per Wikipedia, the problem is commonly stated as: Given N men and N women, where each person has ranked all members of the opposite sex with a unique number between 1 and n in order of preference, marry the men and women together such that there are no two people of opposite sex who would both rather have each other than their current partners. If there are no such people, all the marriages are "stable". The SMP has real-life applications to any problem requiring stable pairing of two sets of equal size. In fact, this problem is always solvable using the Gale-Shapley algorithm . There is a rather big catch however.  While the marriages are always stable, they may not be ideal from the vantage point of an individual.  To illustrate this, imagine three men A,B,C and three women X,Y,Z. Here are their ranked preferences for members of the other group: A: YXZ B: ZYX C: XZY X
Read more