April 30, 2010
New Zealand was a joy to visit as it offers many scenic natural wonders!  In fact, much of its beauty seem to have something to do with glaciers.  For one, the scenic Milford Sound and its surrounding cousins in South Island were carved by glaciers long ago. As you travel northwards from the sounds, you will be met by two actual glaciers in Fox and Franz Josef.  We joined a walking tour on Franz Josef, the bigger of the two brothers.  The tour was an intriguing experience and I decided to do some research upon returning. 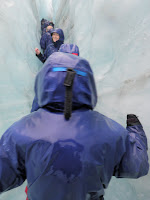 What Are Glaciers?
Glaciers are perennial masses of ice that moves over land. They form when precipitation accumulates faster than it disappears on the surface of a terrain (a.k.a. ablation). As layers of ice and snow build upon each other, the granular ice at the bottom fuses to form firn.

Glacial Structure
Glacial Movement
Glaciers move downslope due to gravity.  Picture ice sliding over the terrain, lubricated by a layer of water.  This layer of water is primarily is formed from friction between ice and rock, but can also be attributed to geothermal heat contributing from the Earth's interior.  The top layers of the glacier move faster than the bottom layers, often resulting in crevasses and cracks on the surface. Glacier speeds vary depending on the glacier and slope of the mountain. They range from 10cm to 30m a day. Glaciers sometimes experience surges due to failures of the underlying rocks and will move a lot quicker than usual.
Glaciers also undergo cycles of advances and retreats.  Franz Josef is currently in the advance phase, although it had retreated over several kilometres between 1940 - 80.
Glacial Geology 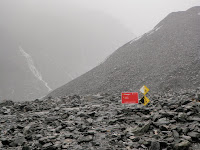 As glaciers move across an area, it absorbs rocks and sediments either through plucking or abrasion. Plucking is the softening and uplifting of rocks due to sub-glacial water seeping into cracks and then expanding during freezing. Abrasion is caused when the ice and its rock fragments slide across the terrain, essentially sandpapering the surface below. This often produces rock flour, fine rock particles that can suspend in water.
Glacial moraines are formed by the deposition of material usually  exposed after a glacial retreat.  They often appear as mounds of till, a pile of mixed rocks, gravel and boulders.  Terminal moraines are formed at the foot of a glacier. Lateral moraines are formed on the sides of a glacier.
After glacial passage, V-shaped valleys usually become U-shaped.  Besides widening and deepening, glacial erosion also smooths the terrain, leaving a relatively flat bottom.

Last year, I took a number of vacations which involved cruising, diving, snorkelling and walking on glaciers. Thinking back on those trips, I could not help but notice that water and ice exhibited different colours in different settings.  I decided to dive deeper into the colours of water. Finally, here are my findings. Water’s True Colour The colour of an object mainly depends on the colour of light emitted from it. In the case of water its colour is also affected by factors like light source, absorption, scattering, and suspended materials. Absorption by water is stronger for red light, but weaker for blue light. Water is therefore, intrinsically blue. However, this effect is only apparent when the water is reasonably deep. This is why a glass of water appears colourless whereas a big aquarium looks bluish through the thickness of water. Why is the Sea Blue? I did two cruises last year, one in the Caribbean and the other in the South Pacific. Owing to the depth of the water, th
Read more

A Very Real Life Application of the Stable Marriage Problem

October 23, 2012
I recently stumbled upon a mathematical problem known as the  Stable Marriage Problem (SMP).  Per Wikipedia, the problem is commonly stated as: Given N men and N women, where each person has ranked all members of the opposite sex with a unique number between 1 and n in order of preference, marry the men and women together such that there are no two people of opposite sex who would both rather have each other than their current partners. If there are no such people, all the marriages are "stable". The SMP has real-life applications to any problem requiring stable pairing of two sets of equal size. In fact, this problem is always solvable using the Gale-Shapley algorithm . There is a rather big catch however.  While the marriages are always stable, they may not be ideal from the vantage point of an individual.  To illustrate this, imagine three men A,B,C and three women X,Y,Z. Here are their ranked preferences for members of the other group: A: YXZ B: ZYX C: XZY X
Read more